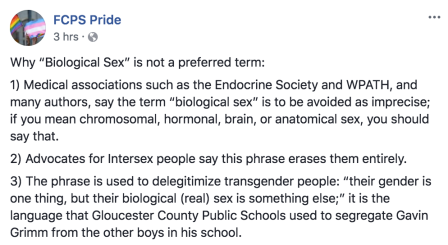 Rigby is trying so hard. He knows this is going to be a difficult fight. And, of course, he has to use intersex people. The man has no shame. Does he not realize that if we cannot acknowledge the basic reality of [biological] sex, then there is no such thing as intersex and therefore the struggles such individuals face because of their condition are not real? 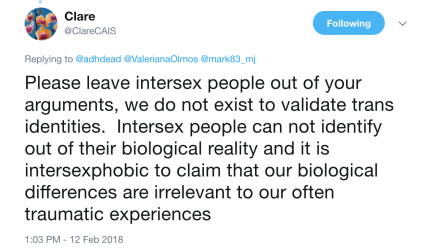 I’ve pointed this out already in Sex Assignment? Part One–the medical and scientific communities don’t regularly use the term “biological sex” because it is redundant. They just use sex. It is understood that sex is biological unless one is using the word in reference to the reproductive act of intercourse. The only time they use the term “sex assigned at birth” is in specific reference to transgender people or intersex people. In reality, only intersex people (those of indeterminate sex) will ever truly experience what it is to have a sex assigned to them.

Sex is binary because there are only two kinds of sex cells (gametes). There are ova and there are sperm. There isn’t a third kind of gamete that’s a mix of the two. There are just two. Everything we understand about [biological] sex starts at the gamete. It is because we have this understanding that we are able to diagnose intersex conditions, or disorders of sexual development.

There’s no such thing as “hormonal sex.” A woman with higher than average testosterone levels is still a woman. A man taking estrogen is still a man. We do not use hormone levels to understand what sex a person is unless it is in the context of someone with a disorder of sexual development whose sex is currently indeterminate.

There’s no such thing as “brain sex.” Every cell in a man’s brain is XY. It doesn’t matter if some structures are larger or smaller or thicker or thinner than the average man’s brain structures. It’s still the brain of a male person. There is no gender center in the brain, and thanks to the plasticity of the brain (neuroplasticity), structures can change over time due to thoughts, actions, experiences, trauma, etc. Because of this, no scientist will say that people are born transgender. They don’t have the data to prove such a thing.

Recognizing that transgender people experience gender dysphoria (a psychological disconnect with or rejection of their ACTUAL PHYSICAL REPRODUCTIVE SYSTEM) does not delegitimize them. Rigby is attempting to manipulate people using lies and shame.

RELATED: How to lie to kids about what it means to be a boy or a girl

Gavin Grimm is a girl. She was conceived female, born female, named Caitlyn Hope, raised female until the age of 14, and then as a teenager she decided that she “feels like a boy” and therefore the entire world must treat her like one.

Does this delegitimize Gavin? No. She is a person–a human being. Her life is valuable. And it is made no less valuable by people recognizing her sex and not recognizing her “gender identity.” It’s always a choice being presented to people: recognize feelings over biology or biology over feelings. It is only people like you, Rigby, who have decided that only one of those choices is legitimate. I choose not to reject Gavin’s natural body whereas you do, Rigby. Feelings change over time. The many stories of gender dysphoric people who have de-transitioned prove this is true. Sex, however, does not change. It is a recognizable and immutable biological fact.

RELATED: Wrapping your brain around transgender arguments: Don’t even try