Well, if you’re gonna lie, you might as well go big or go home:

I’m gonna give him the benefit of the doubt and assume he isn’t delusional and making things up…which means he’s lying.

Let’s look at the Journal of the American Medical Association:

Heck, just Google Scholar search “American Medical Association” and sex and see what you get:

Heh, look at that. Could it be that they only use the nonsensical phrase “sex assigned at birth” when talking about transgender individuals so as not to cause offense to wealthy and politically-connected LGBT activists?

They don’t seem to be cooperating with you, Mr. Rigby.

How about the National Association of Social Workers Code of Ethics:

Look at that–did you notice that none of them bothered to put “biological” in front of sex? You know why? It’s redundant. 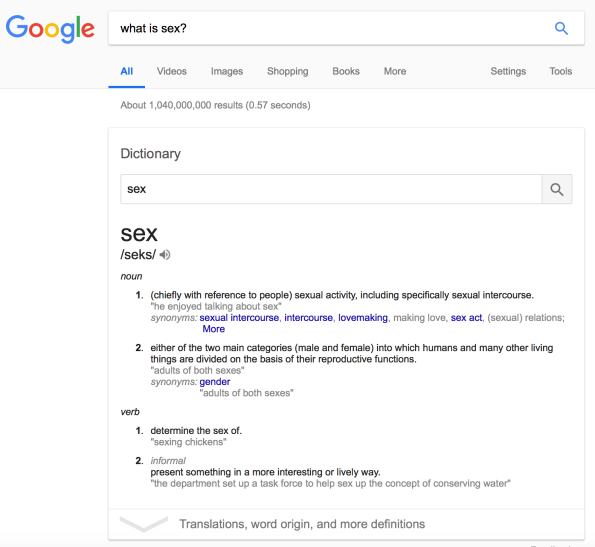 Geez, why aren’t they saying anything about “assignment”? Could it perhaps be because there is no assignment happening when it comes to observing and recording the [biological] sex of mammals?

And OF COURSE the American Psychological Association is going to use the “assigned at birth” terminology. They’re psychologists who deal with psychological conditions only. There’s a reason they can’t prescribe so much as an NSAID. They believe sex is determined by the cerebral cortex. They believe a penis can be a female organ. It’s a good thing they haven’t got the ability to write scripts. They’re Idealists.

Sex is not assigned in over 99.9% of individuals. It is just recorded. Just because someone has a disorder of sexual development (DSD) does not mean they do not have an observable sex. For those who have true intersex conditions where sex cannot be determined–then it is true that doctors and parents may “assign” a sex based on the best information available to them about the genetic and physical conditions of the child. But that has NOTHING to do with gender dysphoria or gender non-conformity in those born with a normal genotype and phenotype.

RELATED: What is sex?

People living with intersex conditions are NOT your shield, Mr. Rigby. Leave them out of this debate. Their existence does not in any way, shape or form justify your anti-biology sexual ideology that you are trying to push on Fairfax County kids. STOP LYING and STOP USING INTERSEX PEOPLE. And I’m gonna say the same thing to Lawyer Dan–just because you might lie in a courtroom that doesn’t mean you have the right to promote falsehood to children.

Oh, and have you told your followers about the horrific experiments and surgeries conducted on intersex children thanks to the work of Dr. John Money, the sex pervert psychologist and originator of “gender identity” itself?

Update: And Mr. Rigby confirms it: this isn’t about science–this is about promoting the gender identity ideology.

RELATED: How to lie to kids about what it means to be a boy or a girl

3 thoughts on “Sex Assignment? Part One”