I am finding it difficult to come up with words to express how I feel right now. I finished watching a “teaser” for the upcoming season of TLC’s I Am Jazz, and then I came across the gender identity policy that the Fairfax County School Board (FCSB) is trying to reimplement.

What’s happening to Jazz is sexual abuse. There’s no other label for it that encompasses what his parents and doctors have done and are planning to do to him.

I wanted to put my fist through the computer screen. My heart is heavy today. It really set the mood for when I began to read the policy linked above.

What really struck me is how badly the FCSB and Virginia LGBT activists want to encourage children onto this path of lifelong pharmaceutical (and quite possibly surgical) dependency. Nearly all children set on the path of “gender affirmation” continue on to take puberty blockers and cross-sex hormones. Too many female teenagers go on to have elective mastectomies.

The approach that the FCSB is taking is to presume that all students who claim to be transgender or gender non-conforming ARE, and therefore without “credible evidence” to the contrary, must be affirmed: 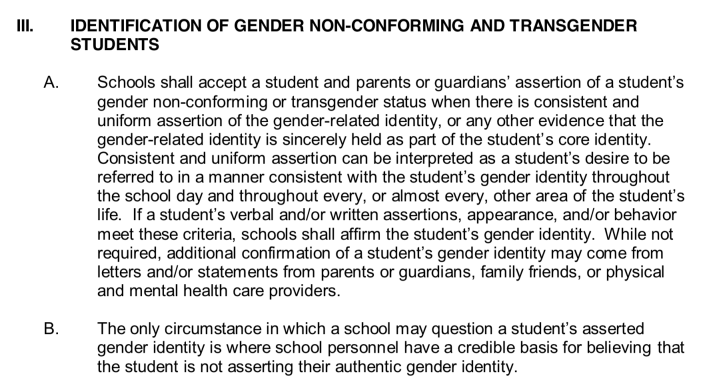 Here’s the problem–what almost ALWAYS happens is this one-way track:

Step 3: Cross-sex hormones (must be taken for the rest of their lives)

Step 4: Surgery (increasingly likely but not a guarantee), especially mastectomies (for females) and breast implants (for males). Surgery on the reproductive organs generally involves permanent sterilization, although years of puberty blockers and then cross-sex hormones will often render people infertile anyway.

Step 5: Legal recognition as the opposite sex if sex-reassignment surgery was performed as required by Virginia state law to change one’s sex on his or her birth certificate to the opposite observed at birth.

In addition, they advocate throwing the rest of the children (those who are able to cope with their biological sex) under the bus. They advocate deceiving students and their parents and forcing students to seek other accommodations for privacy if they discover one of their peers in the locker room is actually of the opposite sex.

And here come the policies that instruct adults to deceive students and their parents while also requiring students to accommodate those of the opposite-sex in facilities specially designated for taking care of private bodily needs, undressing, and showering:

And say good-bye to Title IX protections. Now girls can’t expect to participate in female athletics that 1. don’t allow males to compete against them or take their spots on teams and 2. prevent females on testosterone from participating:

What you can do:

3 thoughts on “Flesh-eating Little Shop of Horrors: I Am Jazz and the Fairfax County School Board”