Everything about this story bugs me. And the fact that Equality Loudoun is trying to use it as “evidence” that the Loudoun County School Board needs to recognize SOGI (sexual orientation, gender identity) as protected classes was no surprise. Never let a #hatecrime go to waste.

Michael Hill was a Kansas high school art teacher, married for 25 years and father of two sons, when he decided to announce to the world that he is gay on October 11, 2017. He chose this day because it was National Come Out Day. It’s not clear if this was also the day his wife found out, but I suspect that it happened on that day or shortly before.

Subsequent media coverage of this teacher NEVER mentions his wife, who he told he wanted to divorce. It is as if she became a nonperson in this entire sordid affair.

On November 25, 2017, his wife wrote about the stressful situation on her blog.

How devastating, especially considering Mr. Hill had posted this photo to his Facebook page less than 4 months before his “I’m gay!” announcement. 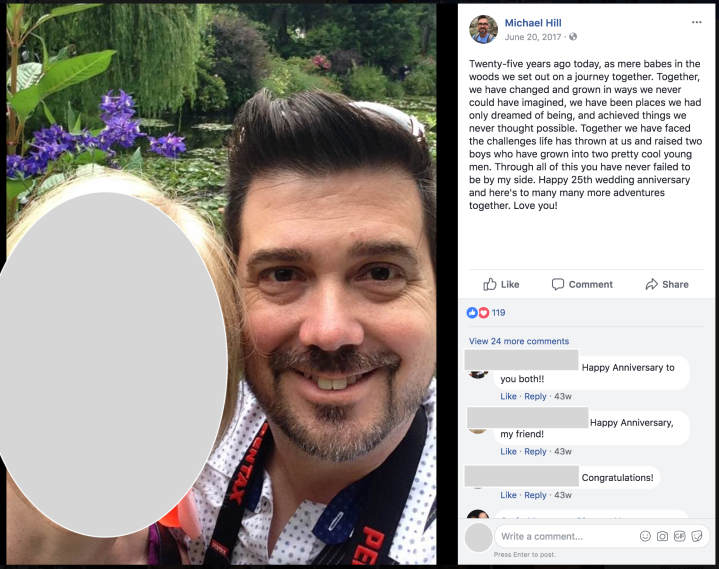 He made a total spectacle of his family, and especially his wife. But the school system that he worked for never discriminated against him. (Remember this for later.)

In January, Hill took a leave of absence and headed to Palm Springs to get ready for his new life in California. In February he made his official move, attributing the reason for the move to some “small-minded bigots,” and it wasn’t long before he started posting photos of himself on Facebook spending time with other gay men, including one who appears to be a romantic partner. He seemed to move on with his life, and his ex-wife was moving on with hers.

And then, on April 17th, Mr. Hill decided to publicly post photos of letters he says he had received from an anonymous person calling himself “A Concerned Patron.” A patron of what is never actually explained in the letters. Police were notified but they were never able to discover the source of the letters.

Hill said his move to Palm Springs was a “huge leap of faith.” I’m calling b.s. on that one. He had gone there weeks in advance to prepare for his move. Of course, he had received tons of support on Facebook, letting him know how absolutely BRAAAAVE he was for “coming out”–how strong he is and wonderful and every compliment under the sun. The wife went unmentioned, of course. Who cares about her when there is such a brave man to praise?

It didn’t take 48 hours for news media to catch wind of the story and report on Mr. Hill’s account of being a target of harassment ever since he had announced his homosexuality (and left his wife, but of course that wasn’t consequential enough to merit mention in the news coverage. She’s just an abandoned woman. Nobody cares about them.)

Needless to say, his post with the three letters went viral, and Equality Virginia leapt on it as one more way to push their SOGI agenda. Never mind that Mr. Hill was never discriminated against by his employer (the school system). Never mind that a SOGI anti-discrimination policy does not prevent an anonymous citizen from sending hateful letters. Never mind that those letters constituted a crime under Kansas state law and the sender would have been prosecuted if he had ever been identified. No, we have to push push push for the protection of teachers’ expressions of their sexual feelings in school. It’s for the kids…or something.