These are books obtained from Loudoun County Public School libraries. It is not clear who is vetting the materials other than Equality Loudoun members, who have proven themselves to be untrustworthy when it comes to their chosen associations. Are the librarians reading the books that are being donated to them in the name of LGBTQ inclusion? Are they being examined for appropriateness as well as literary quality?

I have reviewed two books so far from a middle school library: Crossing Lines by Paul Volponi and The Other Boy by M. G. Hennessey.

“Nah, I knew that was a faggot all along,” Bishop defended himself. “How ’bout you, Adonis? Did you know?”

“Are you kidding?” I said as we leaned into the turn, three abreast. “I knew from fifty yards back. That’s why he runs so slow. His butt hurts.”

This book is inappropriate for the age group who would be checking it out from the school library (ages 11-13), but it is also of poor literary quality. There really isn’t much more for me to say than that. 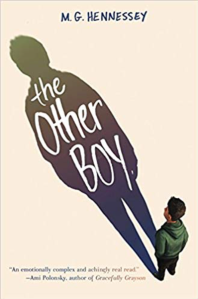 This book starts out as if written from the point of view of a stereotypical 12-year-old boy – name is Shane, attracted to girls, plays baseball, the best friend uses labels like “dude”; hair is buzzed short. It is revealed to the reader that Shane is transgender when the father calls her a “tomboy” instead of a boy, and she is devastated.

Like every other transgender story out there, the magic age of three years old is used – at that age, the character insists she is a boy despite her female body. At age eight she reveals her desire to be treated like a boy to her third grade music teacher who promises not to tell anyone, including Shane’s parents, although she does encourage Shane to tell her mother. And, like nearly every other transgender story, it is all about stereotypes. Shane explains to her mom how she feels:

I confessed that I hated looking in mirrors because my hair was too long and made me look like a girl. I explained that I didn’t want to do ballet anymore, because only girls do that.

Shane is “stealth” in junior high, meaning no one, including her best friend, knows that she is female. She even asks a girl on a date to the movies without revealing her sex.

There is another example that Shane’s understanding of sexual identity is based on stereotypes. When visiting a clinic to obtain a prescription for testosterone, Shane describes another child in the waiting room:

There was a little kid sitting across from me, probably only eight years old. Her hair was still boy-short, but she was wearing a tutu and pink sneakers. her mom sat stiffly with her hands folded on her lap, staring off at nothing, while the kid played a game on her phone. It made me feel funny watching them; I couldn’t tell if the mom was happy to be here or not. Her lips were pursed tightly together, like she was waiting on bad news.

And that’s the extent of Shane’s interaction, and yet she used female pronouns to describe the child. How did she know what pronouns to use? The tutu and pink sneakers, of course. And the use of the phrase “her hair was still boy-short” was telling…because apparently short hair is the domain of boys.

At the clinic there is a male nurse who calls himself Rainbow, and the reader discovers that Shane has been on puberty blockers since age 11 and now wants to start testosterone at age 12.

The wrong body theology is interwoven throughout the entire book, as well as lies about the physical changes females can obtain in their pursuit of a male identity.

Shane asks the doctor if she will ever be a “real boy,” and the doctor replies:

“The most important thing to realize, Shane, is that you already are. You’ve got a boy’s brain , and there are ways we can help you get the rest of it eventually, if you want. But all that stuff is the least important part about being a man. Does that make sense?”

Of course, what is never explained in the book is what the most important part about being a man is apart from conformity to societal stereotypes such as clothing, hair styles, hobbies & interests, and sexual preferences.

At the doctor’s appointment Shane’s father expresses his concern about the permanency of the physical changes including sterility, and Shane counters with:

“This would permanently make me who I was supposed to be all along.”

Later, in direct contradiction to the concept that the least important part of being a man is related to biology, Shane asks his dad at a restaurant:

And then, in script-like fashion, Shane’s dad has an epiphany when Shane uses an illogical but popular description for her experience:

“What if you woke up tomorrow, and someone had switched your body while you were asleep? […] suddenly, you had a girl body. Would you automatically feel like a girl? I mean, you’d have the same brain. All that changed was your body.”

He looked uncomfortable. “I don’t know. I mean, I wasn’t born that way–”

“But neither was I!” I said impatiently. “I was born with a boy brain, just in the wrong body. It sucks.”

This is magical thinking. Without any sort of reference to what it is like to actually be male which requires a male body, it is impossible for a female to “feel like a boy.” The only thing a female person can go on is what she observes about males in her society, how males behave, and what males say. Then, she projects her assumptions about their feelings onto them, and then concludes that since she shares those same feelings (projections), then that means she has a boy brain.

Shane’s mother calls testosterone “medicine,” and after the entire school finds out that Shane is female (sending Shane into a bout of depression), she encourages her daughter to take the injection even though she doesn’t want to:

Around dinnertime, Mom knocked again. “Shane, it’s time for your shot. Dr. Anne said it’s important to do it around the same time every week, so we really should’ve done it last night.

I sat up in bed. Had it only been eight days since my first shot? It felt like a lifetime ago.

“I could come in real quick and give it to you,” Mom offered.

Silence on the other side of the door. Then Mom said, “Why don’t we go ahead and do it anyway? I have it all ready.”

The author does a good job describing Shane’s emotional experiences as she navigates her deceptions and then being “outed” at school. What Hennessey does not do is explore the brokenness of Shane’s family, instead treating it dismissively, as if it had nothing to do with Shane’s dysphoria. The author also shows zero concern for boys’ privacy rights which Shane tramples all over in her deception to be seen and treated as a boy.

Although the quality of the writing is not bad and it is much more emotionally engaging than Crossing Lines, this book’s message is terrible. The Other Boy promotes magical thinking, wrong body theology, and treats boys and girls like walking, talking stereotypes.

One thought on “LGBTQ Book Reviews”