In 2015, Equality Virginia filed a petition to amend the law:

The petitioner requests that the Vital Records regulations be amended as follows:

Virginia’s birth certificate gender change regulation should not require surgery, based on a modern understanding of appropriate treatment for transgender people.

Virginia’s birth certificate gender change regulation should not require a court order, as courts are a costly and complicated barrier to many transgender people, and medical providers, rather than judges, have the professional expertise to request the appropriate gender marker on a birth certificate.

The way the laws stands currently (and has for decades), a person can amend the sex listed on their birth certificate only by having a medical procedure (sex-reassignment surgery) and presenting documentation of of said procedure to a court judge (VA Code § 32.1-269 E.).

Activists claim that this is too burdensome in both effort and cost. They claim that people should be able to change the sex on their birth certificate even if they still have the genitals of their birth sex.

Remember, they believe biological sex itself is a social construct. 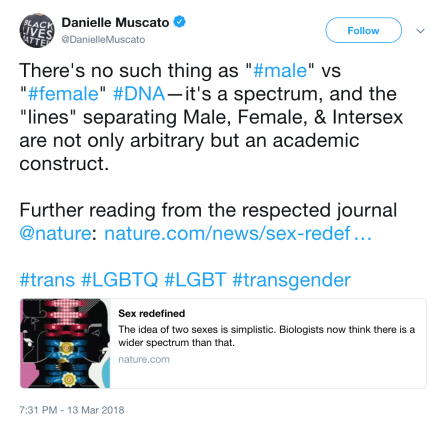 A birth certificate is a “snapshot” in time: it records a person’s sex, given name and their biological parents. Unless a person has a serious intersex disorder (described in VA Code § 32.1-269 B.), it is presumed that medical doctors have enough training to easily determine the sex of a child based on what reproductive system it appears that he or she has.

Sex, in mammals, is immutable. This is scientific fact. It’s not an “arbitrary academic construct” nor is it a “social construct.” It is not assigned. It is observed, described and recorded. Every biologist and medical doctor acknowledges this.

Dr. John Money, a psychopathic and pedophiliac psychologist, concocted the concept of “gender identity” in the mid 1950s. His theory was that you could manipulate a person’s gender identity (how they thought of themselves) through transformation of the body and forcing adherence to sex-based stereotypes. His theory was proven wrong when a patient he had experimented on throughout his childhood resisted the attempts to “turn him into a girl.” Both the patient and his twin brother (who had also been involved in Dr. Money’s incestuous pedophiliac gender experiments) committed suicide as adults.  However, Money’s theory that “gender identity” was an actual thing separate from sex remained.

At the last Fairfax County FLECAC meeting, Lawyer Dan argued that biological sex/gender were inaccurate terms. That all the respected medical communities used “sex assigned at birth.” This is utter rubbish, of course. But, assuming he is correct, then a birth certificate is simply a vital record that describes the condition in which a person was born–it doesn’t describe how a person will identify. It does not record gender identity–how could it?

In one of the most convoluted court rulings I have ever seen, a judge recently ruled, for all intents and purposes, that gender identity determines what a person is as opposed to his or her sex.

Anyway, back to the Equality Virginia petition. Notice, they didn’t try to go through the appropriate process: legislation. Instead, they tried (and subsequently failed) to go through Terry McAuliffe’s Leftist executive branch of government. Equality Virginia urged all their supporters to take part in an online townhall comment period. What’s clear is that all the supporters believe that boys and men should be able to self-ID their way into womanhood. Being female no longer has anything to do with being a woman.

Apparently, being able to father children is a mark of womanhood:

Because gender confirmation surgery results in sterilization, the reproductive rights of transgender individuals are sacrificed uneccesarily in order for their actual gender to be acknowledged by the state

But when you ask such people what womanhood does mean, and what exactly is a woman, do you know what answer you’ll get?

“A woman is someone who identifies as a woman.”

It’s a mad world, my friends. The petition failed because:

The Board of Health does not have statutory authority to amend the Regulations Governing Vital Records (12VAC5—550) as requested by the petitioner.  Section 32.1-269(E) of the Code of Virginia states as follows: “Upon receipt of a certified copy of an order of a court of competent jurisdiction indicating that the sex of an individual has been changed by medical procedure and upon request of such person, the State Registrar shall amend such person’s certificate of birth to show the change of sex and, if a certified copy of a court order changing the person’s name is submitted, to show a new name.”  Given this current statutory requirement, legislation would need to be enacted authorizing the Board of Health to amend the regulations as requested.

So, armed with gender ideologues in the House of Delegates, activists sought to pass legislation that would change Virginia law: HB 407.

But these people are relentless. They’re gonna try again next year, guaranteed, and they’re going to work hard to get more gender ideologues (read: Democrats) elected to the House of Delegates.

The #WarOnWomen is being conducted by Democrats.

3 thoughts on “In Pursuit of Womanhood: Progressives’ War Against Women in Virginia”