Apparently, starting with the February meeting, the committee had security present.  Whether they were armed or not has yet to be confirmed.

Those individuals seemed to think the guards were armed whereas an observer I talked to later said he didn’t think they were armed. It was too hard to tell from the bit of video that I had of a security guard at the March meeting: 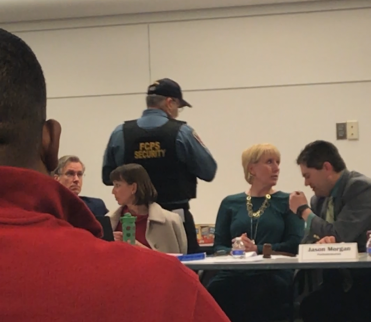 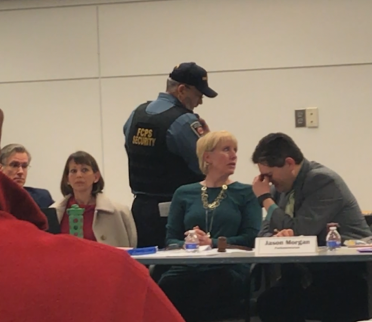 Update: additional footage from PJ Media’s Nicholas Ballasy shows that this guard was not armed:

It is also not clear WHY the committee thought they needed security at the February meeting in the first place. Were they tipped off to a rumor that a large number of observers were to be expected? And if so, why would an increased public presence create an immediate need for security? Heck, FCPS students don’t even get guards though it is STUDENTS who are at risk from violence and not school board representatives.

Despite being packed like sardines in the third floor conference room, observers politely made room for newcomers, eventually exceeding capacity by twenty people or so.

There were some snickers and laughs (admittedly most were from me), but for the most part observers were quiet. And why wouldn’t they be quiet? Parents desperately wanted to hear what insanity the Leftist activists on FLECAC were coming up with for their children.

There was only one verbal altercation that I saw. It involved an observer and a committee member (Lawyer Dan, of course) who had started waving his hand at the observer’s camera and making faces at her. When she responded verbally, a security guard came in and asked her to leave. She refused, and nothing else happened.

There was no violence nor threat of violence at any point in time. The lady also never violated Lawyer Dan’s personal space—she remained as pressed against the wall as much as possible the entire time. Not that he can’t keep from lying about it:

Was the observer behind his shoulder? Nope. Look at the picture. She was directly behind the woman who was seated perpendicular to him, pressed against the protruding corner. Here’s another angle to show you the distance:

Keep on lying, Dan. You only expose your character issues further. What’s obvious is that you did not like having people record you. Too bad, Dan. That’s the price of “public service.”

The atmosphere might have been a bit tense here and there for some sensitive people who realized that the observers outnumbered the committee members, especially since the vast majority of those observers were not Leftists. Personally, though, it just felt like how I’d imagine sitting in the audience of a Maury Povich show would be.

“This can’t be real” just kept rolling through my mind.

After the meeting ended, Alex Dixon, a school board member representative, asked Roxanne Edwards, a transgender activist who had been observing the meeting, if he would like an escort to his car. It was a ridiculous question since, as far as I could tell, he had been completely ignored by the rest of the observers. Edwards was also present at the February meeting and obviously felt safe enough to return to the March one.

The next day, Lawyer Dan posted a public statement on Facebook in an attempt to paint the observers as a group of attackers with the potential for becoming violent in the future. Fellow Leftists were quick to jump on the bandwagon. He wrote:

[…] some people will continue to attack me for this. That’s fine, as long as the attacks remain verbal and not physical.

Come on, Dan, you’re gonna need to ratchet up your Alinsky game. That one was weak.

Look at this comment from Pat Hynes, the Hunter Mill District Representative on the Fairfax County School Board:

Was there any intimidation, name-calling or shouting down from observers at the FLECAC meeting, which is what Dan’s FB post was about? Nope. But that’s okay. Just imply that this is the kind of thing FLECAC members face and accuse concerned parents of supporting harassment and discrimination of kids. There, they’ve all been unpersoned and so their concerns can be ignored.

It’s uncomfortable, isn’t it, Leftists, to have all those parents’ eyes watching you as you vote and their ears listening to you discuss the obscenities and convoluted gender ideology that you are planning to teach to their children–children who are UNDER THE LEGAL AGE OF CONSENT? People might even think you are…..perverted.

I certainly do. I sat there and thought, ‘Well, I’m looking at tables full of perverts. This is a strange experience.’